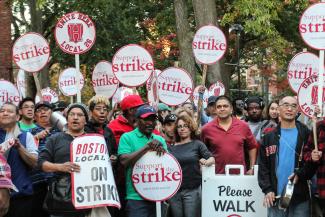 Organizing Workers Who Place Food on the Table

Ed Childs started as a dish washer at the Sheraton hotel in Boston 46 years ago. He moved to Harvard University two years later as a dining hall worker. He was in a leadership position initially in the Hotel Employees and Restaurant Employees Union (HERE). In 2004, Union of Needletrades, Industrial, and Textile Employees (UNITE) and Hotel Employees and Restaurant Employees Union (HERE) merged to become UNITE HERE. Ed led the Harvard University Dining Service Workers Union (HUDS) for four decades in several struggles and has been one of the leaders instrumental in building a strong union, which is represented by UNITE HERE Local 26. He has taught courses on how to build a militant rank and file union and develop leaders from bottom-up in contrast to the top-down business union model. He retired 18 months ago from his position as chief steward in UNITE HERE Local 26. He worked as a cook in the Harvard dining hall services, serving many generations of international students, one of his specialties was making halal dishes. After his retirement, he has been working in an advisory role in UNITE HERE, training union members and helping with contract negotiations.

Here is a lively interaction of Tamarai from Workers Resistance with Ed Childs in Boston on issues of dining hall workers, unionizing, historic victory at Harvard University, pandemic and loss of jobs, contract negotiations, Amazon workers struggles and farmers movement in India.

Could you tell us a little about UNITE HERE and UNITE HERE Local 26 which represents Harvard University Dining Service Workers (HUDS)?

UNITE HERE is a labor union representing workers in hotels, restaurants, cafes and food services in universities, airports and casinos in the United States and a few cities in Canada. UNITE HERE Local 26 represents food service workers in Harvard University, a few other educational institutions in Boston,    some hotels and casinos in the states of Massachusetts and Rhode Island. There are 750 dining hall workers of Harvard University represented by Local 26. Our union has cooks, servers, dish washers and cashiers. Majority of the workers are women and immigrants. They come from Africa, Asia, Middle East, Europe, Caribbean Islands and Latin America. There are 17 major dining halls and 6 minor ones serving a total of 17,000 people, roughly 8,000 of those are undergraduate students and 2,000 are postgraduate students in Harvard University.

Harvard University employs 500 workers. The Compass group employs the rest of the dining hall workers in Harvard law school and medical school. However, all employees have the same contract with some insignificant differences in benefits alone. The union fought for equitable contract 40 years ago, which has kept our workers united.

The union ratified a 5-year contract on September 23, 2021 after several months of negotiations. Can you walk us through this? What were the challenges and how did you achieve this?

Our contract was expiring in July 2021. We started preparing for the contract negotiations a year before, while the pandemic was on. We had weekly meetings for the leaders and bi-weekly meetings for the members. About 25% of our members attended the meetings, which for the United States was very good!  The negotiations with the management started in January 2021. Management's intentions were very clear to us. They wanted to create a workforce of 40% full-time workers and 60% part-time workers. Right now, 70 to 80 % of our workers are full-time. The management planned to cut back the hours of the full-time workers too.

I have to go back to 2020 to give you a better idea about the management's attacks. During the pandemic, Harvard Law School fired all the 55 dining hall workers as the school was conducting online classes.  When the school opened this year, the management slated not to reinstate the workers. The union insisted that all the workers be hired back at the law school or be integrated with workers in other dining halls. During the pandemic they shut down the school of design dining hall and seven workers lost their jobs. In addition, 15 catering and bar workers lost their jobs.

Based on the experiences of the past, our union understands very well that workers united cannot be defeated. We started with regular discussion groups in the dining halls to allay the fears of the workers, who had already experienced many difficulties during the pandemic. We formed a coalition with custodians and security guards represented by Service Employees International Union Local 32BJ (SEIU 32 BJ), which represents 1500 workers, Harvard Union of Clerical and Technical Workers (HUCTW), which represents 5000 workers, and the Harvard Grad Students Union representing 4000 students. We had many walkouts in the last few months. We coordinated demonstrations in front of the Dean's office.

Our union formed a contract committee of over 30 workers to negotiate the collective bargaining agreement that was open to all members and we demanded face-to-face meetings. After nine months of negotiations, we started to prepare for a strike. We released joint press statements with other unions.

For our union, job security is very important; we discuss wages only at the end. After months of negotiations, Harvard management realized that our strong union with its united workforce would not buckle down. We had the support of students and other unions as well. Harvard management came up with the new contract, which the union ratified on September 23. We were very happy to have won job security. This was a big victory for us. In this five-year agreement, there were no cuts in jobs or in hours. Workers laid-off from some Harvard schools that closed dining services during the pandemic would be brought back into the workforce according to their seniority of working at Harvard. Union members and management agreed with the wage increase. The contract included a 15 percent increase in wages over the duration of the contract. Some workers had higher wages than others do, but the increase in dollar amount per hour in the contract was the same for all categories of dining hall workers. This kind of solidarity with lower-paid workers has kept our members united. We have the same benefits we had before, including excellent health insurance and pension benefits.

The COVID-19 pandemic was devastating for Americans with close to 700,000 deaths at this time. Researchers used death records from California Department of Public Health and estimated 22% excessive mortality during the pandemic in 2020 compared to 2018 and 2019. Food/agriculture workers experienced 39% increase in mortality. When stratified according to race, it was highest among Latinx workers. Cooks experienced high-risk ratios for mortality comparing pandemic time to non-pandemic time. Did Harvard University management give your workers adequate PPE and put in place other safety measures?

Fortunately, we did not have any deaths but some of our workers developed COVID infection and also experienced significant psychological stress. In one dining hall, we had two workers and one student get COVID infection but, unsurprisingly, the management did not inform us. Later, we found out that the management was walking around from hall to hall spreading the virus. Soon after, employees from that dining hall stopped reporting to work in protest and resumed work only after the management agreed to take the right steps. Initially, the custodians were not provided with enough masks and wipes. Harvard University currently has an endowment of more than 50 billion dollars, which is more than the GDP of several countries in the world. Still, they were cutting corners when it came to protecting its frontline workers. We insisted that management follow the safety protocols recommended by the Harvard School of Public Health. We succeeded in getting PPEs after our protests.

University management at the start of the pandemic in 2020 proposed 30 days of paid leave for dining hall staff for schools that had closed. During the University's summer vacation many of us were laid off and got a small stipend. We felt 30 days of paid leave is not enough for workers to support their families. We were able to negotiate and get 70% of our pay throughout the pandemic.

In 2016, Harvard University was going to make changes to the health insurance, which would have caused a lot of hardships to the dining hall workers. This forced them to go on a strike for three weeks and workers emerged victorious. Can you tell us the key organizing tactics to bring a university with more than 50 billion dollar endowment in 2016 to its knees?

Coalition building was paramount. Spending over 40 years in the Workers World Party has taught me that. We reached out to all groups that had an interest in joining us in the struggle to maintain health care benefits.

Mere posturing is not enough. For a strike to be successful extensive planning has to be undertaken. By the time the strike began in October 2016, we had our fighting infrastructure well-established. The workers had a historic victory after 21 days of strike, Harvard agreed to pay the minimum salary we demanded. The university agreed to the other key demand to cover the costs of healthcare plans.

Are you working with Amazon workers who are trying to unionize in some of the highly exploitative warehouses in the country?

Jeff Bezos, the executive chairman of Amazon, does not believe in having "entrenched workforce". In June this year, the Teamsters Union with more than 1.3 million members passed a resolution to support the Amazon workers. I am saddened by the fact that there has been no open discussion among other unions thus far on how to support the Teamsters efforts. This reflects the backwardness and immaturity of the labor movement in the U.S. At a personal level, I am in solidarity with the brave Amazon workers, who are trying to organize in some states in the U.S, and have attended rallies to support them.

Finally, Ed, you have attended many actions in Boston in support of workers and farmers in India. Do you have any solidarity message for our comrades there who are fighting against the pro corporate farm and labor laws implemented by the Modi government?

I have attended several demonstrations in Boston to support the farmers and workers in India, who are fighting capitalism and imperialism. The farmers’ agitation which began a year ago is very inspirational. It is on such a huge scale and is so enduring. It is a beacon for labor organizing in the world. Unions in this country need to work with militant unions organizing workers in India. There is an urgent need to make our workers struggles global.