Strike As A Weapon of United States Workers: An Update 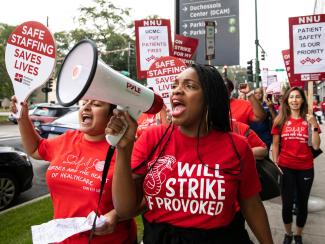 In 2021, there were sixteen work stoppages involving 80,700 workers. The U.S. Bureau of Labor Statistics documents major work stoppages involving more than one thousand workers for one shift during the work week. Cornell University Industrial and Labor Relations (ILR) School’s Labor Action Tracker, which documents smaller work stoppages in addition to the major ones, found 140,000 workers participating in 265 work stoppages in the country during 2021. 32.8% of the total strikes were by non-union workers. The year 2022 has been witnessing more militant strikes than 2021, there were 180 strikes from January until June compared with 102 strikes for the same time period in 2021. The Labor Action Tracker has recorded 35,250 workers participating in forty-one strikes just between 15 August and 15 September in 2022. Below is a brief update of some recent and ongoing workers' struggles.

Minnesota is a mid-western state where 15,000 nurses struck work from September 12th to 14th across 16 hospitals in the state. Chris Rubesch, First Vice President of the Minnesota Nurses Association said, "Corporate healthcare policies in our hospitals have left nurses understaffed and overworked, while patients are overcharged, local hospitals and services are closed, and executives take home million-dollar paychecks". Their demands included 30% increase in pay, hiring more nurses, better work schedules and family leave benefits. After returning to work on September 15th, they are negotiating for a fair contract that will place patients before profit. The nurses strike in Minnesota is one of the fourteen healthcare workers strikes in 2022. In the same state about four hundred mental health workers, who are members of Service Employees International Union (SEIU), are getting ready to go on strike in October. Dana Disbrow, a psychiatric associate said in the union release that ".... we are ready to strike for the health, safety and dignity of ourselves and our patients."

There have been eight strikes of teachers in the last 2 months. Columbus, the capital of Ohio, witnessed a militant strike of 4000 government school teachers, nurses, psychologists, librarians who are members of the Columbus Education Association (CEA) from August 21-24. The issues they raised were not just about their wages but also about the conditions in the schools, about hiring more teachers so that children could get more attention, hiring art, music and physical training teachers for the overall development of children. The strike witnessed solidarity from students and parents, community organizations, small businesses and others like the Ohio state nurses organization. It ended with victory for the teachers on August 25th after an agreement was reached which will give them a 4% annual increase in pay, reduction in the number of students per class, better heating, air-conditioning and ventilation, as well as hiring teachers for art and music. Seattle, the home of big corporations like Amazon, Boeing, and Microsoft had a teachers strike in September. There were strikes in universities across the country. e.g., East Michigan University teachers reached a tentative agreement recently around salary and health care issues.

Railroad Workers - An Important Strike Averted at The Last Minute

The two big rail freight corporations are BNSF railway and United Pacific. The former made a net profit of 6 billion dollars in 2021 and the latter made a net profit of 6.5 billion dollars. Lance Fritz, the CEO of United Pacific Corporation's total compensation in 2021 was more than fourteen million dollars. Railroad freight workers in the U.S. are described by some as the backbone of the economy. 115,000 railroad workers, members of twelve different unions representing them had voted to authorize a strike in July this year. In the last 6 years, the railroad freight corporations have fired more than 30% of the workers as part of cost cutting measures. The workers in this industry have some of the most egregious of work demands. At the heart of the dispute was inflexible and demanding hours. "Abusive and punitive attendance policy is breaking apart families and causing locomotive engineers and other railroaders to come to work dangerously fatigued" the Brotherhood of Locomotive Engineers and Trainmen said in a statement in May. Aaron Hiles, a freight worker, felt unwell and made an appointment to see his doctor in June but cancelled it as he feared penalties. He subsequently suffered a massive heart attack and died on June 21st whilst on duty. His death has caused a lot of anguish and outrage among the workers.

Martha Grevatt, a militant labor organizer, wrote recently, "Rail companies such as Union Pacific and BNSF have adopted a cost-cutting model known as Precision Scheduled Railroading (PSR). Shipping processes, equipment and, most importantly, the labor force are streamlined to control the “operating ratio” — the relationship between a company’s costs and its revenue, i.e., the rate of profit. When the number of workers is held to a minimum — in this case by an extreme, PSR-driven attendance policy — profits are higher."

The railroad freight workers are governed by the Railway Labor Act of 1926 according to which the President is empowered to appoint an emergency board to mediate and avert a strike to prevent interruption to commerce and resultant economic consequences. The profits, of course, to corporations cannot be compromised at any cost. On September 15th, after 20 hours of talks between President Biden's administration and union leaders, a tentative deal was reached. Only two out of the 12 unions have ratified the deal.

It was important for the ruling class to avert the strike as the railroad workers strike could have resulted in losses of two billion dollars per day and caused a massive economic disruption in agriculture, coal, healthcare, manufacturing and other sectors. In the weeks to come, the unions and their members will be discussing the 'tentative deal' between the corporations and the workers. Gabe Christenson, co-chair of the rank and file-led group Railroad Workers United, tweeted after the deal was announced: “A full-blown strike is still a distinct possibility this Fall.”

The workers of 238 stores of Starbucks, which is a highly profitable coffee chain in the U.S., have unionized since the workers formed their first union in December 2021. Starbucks Workers United led by young people is an affiliate of SEIU. On September 23, Starbucks Investors Day was held at Seattle at the company headquarters, where Lakshman Narasimhan was introduced, he will start his new position as CEO in October 2022. Several hundred Starbucks workers from many states gathered for a powerful rally that day in front of the company headquarters and other union members also joined them to show their solidarity. While accusing the company of union-busting tactics, they spoke with one voice, "“What do we want? Contract! When do we want it? Now!”

In Boston, members of Starbucks Workers United called off a strike in September after 64 days of being on the picket line at a store near Boston University's campus. There were staffing and scheduling issues and the workers had to deal with an abusive manager. The manager will be replaced and workers have been promised that their input will be asked for scheduling hours of duty. Union organizers from the School Bus Drivers Union and truck drivers (Teamsters union) gave a lot of support, in addition to the support received from the students and from the local community.

Strike as a Weapon

In August 2022, Gallup poll showed that 71% of people in the U.S. back unionization at this time. From Amazon workers to teachers, they are challenging the status quo. This is very encouraging for all the workers.

Lenin wrote at the end of the 19th century, " strikes are, .... “a school of war” and not the war itself, that strikes are only one means of struggle, only one aspect of the working-class movement. From individual strikes the workers can and must go over, as indeed they are actually doing in all countries, to a struggle of the entire working class for the emancipation of all who labour."