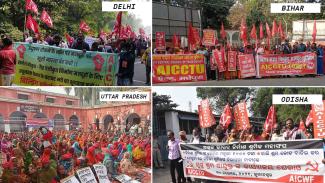 Demonstrations were also held in South-24 Pargana in W. Bengal, Srikakulam in Andhra Pradesh and Mansa in Punjab.

S. K. Sharma, the General Secretary, AICWF, congratulated construction workers for their militant participation, and said that a month-long campaign in will culminate in demonstrations at state headquarters throughout the country.

A. To strengthen the welfare boards, 1% of GDP should be allotted by the union government and the cess should be increased to 3%. No infringement of the rights of unions and facilitate enrolment of workers in the boards by making enrolment easier.

B. Withdraw 4 labour codes that are anti-labour.

H. Guarantee the safety of women workers at the workplace.

I. Strengthen legal provisions for the safety of migrant workers.