The Struggle of Coal Pickers in Jharkhand 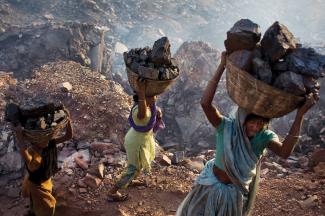 As the process of privatization of coal industry is gaining momentum, the situation of workers of coalfield is becoming more and more similar to the scenario of pre-nationalization era.  The grip of coal mafias over the entire process of production as well as dispatch is getting stronger day by day. As a result, the struggle of livelihood of coal pickers, the most wretched section of toiling masses in the coal field sector, has become a significant phenomenon in recent years.

In some cases they work as a self-employed lot, but mostly they eventually become a part of some or other mafia network and work there as unofficial casual employees due to lack of regular livelihood opportunities.  Illegal mining and illegal transportation of coal has always been very risky job. A lot of coal pickers are killed every year in the process in various districts of Jharkhand. The private companies running outsourced collieries often contribute to the mechanism of extreme exploitation by retrenching their employees at their will and by not paying them minimum wage decided by high power committee of CIL.

The accidental death of miners engaged in so called illegal mining is a regular phenomenon. Recently the situation has further deteriorated. On 19th of November, 4 coal pickers, described as unsocial elements by the administration and media, were killed by CISF firing without any valid order from administration at Baghmara colliery (BCCL). One newly appointed and trigger-happy commandant of CISF ordered the firing only to ensure his share of booty from the mafia gang for whom the victims were working. Many more people remain untraced till date.

The gravity of the incident has definitely made the task of working class movement more challenging. The revolutionary trade union movement possibly cannot move an inch forward without building an effective resistance against the unholy nexus of mafia, management, administration, and politicians who are responsible for such unfortunate development.

Coal workers organised protest demonstrations to press for their demand of speedy conclusion of wage agreement (NCWA-11) in all the subsidiaries of CIL. Their demand is that wage agreement must be concluded at the earliest on the basis of at least 28% minimum guarantee benefit (MGB).  CMWU (affiliated to AICCTU) participated in the joint program which took place on 9th Dec, 2022. CMWU is carrying forward the process independently even after. In case of failure of next round of meeting of JBCCI, scheduled on 3rd of January, 2023, there is every possibility of a strike that can shake the industry any time in the near future.