In Memory of Loved Ones: Count Every Death, Share Every Loss 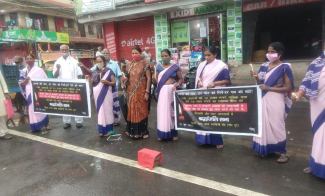 As a part of an all-India campaign “In Memory of Loved Ones: Count Every Death, Share Every Loss”, jointly organized by intellectuals and social activists across the country, various sections of workers, including scheme workers, railway employees, sanitation and municipal workers and other unorganised and organised sections honoured the memory of people who died during the Covid period by lighting candles and remembering every death.

In response to the call given by the All India Scheme Workers Federation (AISWF), the Bihar State ASHA Workers Sangh (affiliated to AICCTU) organized memorial meetings at PHCs and Sadar Hospitals on 15 June to honour the memory of ASHA workers who died during the period of Covid pandemic. Despite pouring rain, hundreds of memorial meetings were organized across the state. Large number of people remembered their loved ones by offering floral tribute at the portraits of deceased ASHA workers. Similar memorial meetings were held in various places in other states like Uttarakhand, Assam, U.P, Tamil Nadu, Karnataka, Delhi, etc.

All India Convener of AISWF and the president of Bihar State ASHA Workers Sangh, Shashi Yadav said that it is, indeed, very painful that not even a list of deceased ASHAs has been prepared either by the State or by the Centre. The government is not serious about anything, from treatment to compensation for ASHAs while ASHAs stand firmly in the frontlines of the battle against the Corona pandemic. A large number of ASHA workers died heroically battling Corona on the frontlines, for non-availability of proper safety equipment. The government does not have statistics related to ASHA deaths, while hiding whatever figures they do have. Today, governments are shirking their responsibility of according them proper dignity, honour and respect by not providing social security to their bereft families.

In Karnataka, the campaign was inaugurated by powrakarmikas (sanitation workers) on 6th June in Bengaluru lighting candles to remember all lost souls and in particular Smt Susheelamma, who passed away on 05.05.2021.

On 20th June, at Basavanagara, Bemgaluru, as part of the campaign, powrakarmikas remembered Shri Krishnappa who had passed away in April this year.  They demanded that compensation be paid to all persons who passed away due to the negligence of the government. π