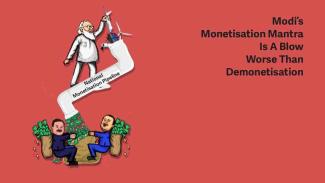 Statement against National Monetisation Pipeline by

India Put on Sale by the Ruling Regime at the Centre!

It is the Task of the Working Class to Save India!

The so called ‘National Monetisation Pipeline’ (NMP) was announced by the Union Finance Minister on 23 August 2021, to raise Rs 6 lakh crores over the next 4 years. The plan envisages leasing out various government assets such as 26,700 Kms highways worth Rs.1.6 Lakh (L) Crore (Cr);  400 Railway stations and 150 trains (Rs.1.5 Lakh Cr);  42,300 Circuit Kms of Power Transmission Lines (Rs.0.67 L.Cr);  5,000 MW Hydro, Solar and Wind Power Generation assets (Rs.0.32 L.Cr);  8,000 Kms of National Gas Pipelines (Rs.0.24 L.Cr);  4,000 Kms Pipelines of IOC and HPCL (Rs.0.22 L.Cr); BSNL and MTNL Towers (Rs.0.39 L.Cr);  21 Airports and 31 Ports (Rs.0.34 L.Cr); 160 Coal Mining projects (Rs.0.32 L.Cr); and 2 Sports Stadiums (Rs.0.11 L.Cr) etc. for various durations of lease. It is claimed that the funds so generated will be invested in expanding infrastructure. This is nothing but a nefarious design to hand over all infrastructural assets to private hands virtually free for revenue generation by them without any obligation of capital cost while sharing just a small part of that huge revenue with the Govt.

That is why this plan is being criticized roundly as free privatisation (or rather, doling out) of national assets built with tax-payers’ money. Finance Minister Smt. Nirmala Sitharaman is defending this decision saying the ownership of the assets will remain with the government and therefore it is not outright privatisation. Nobody is convinced by this justification.

While this debate is going on, further advisories went out from the government to all the Gram Panchayats to monetise their assets such as common lands, water bodies, common buildings etc. to add to their finances. The diabolic effect this will have on village society can only be imagined.

Common sense will tell us that the immediate effect of this latest government move will be price-rise for the common man for all the infrastructural services being leased out to private players because the private operators, as per the official NMP document, have been empowered to increase the user/service charges of all this infrastructure and make windfall profit at the cost of the common people.

Contrary to the argument by the government that jobs would be created, thousands of workers will lose their jobs, worsening the already alarming unemployment situation. The quality of jobs will deteriorate further. The SC/ ST sections will be among the worst affected, as there is no reservation in jobs in the private sector.

Add to this is the government’s announcement to sell 100 profit making PSUs. This means that the profit flowing into government coffers will stop and start flowing into the coffers of private corporate houses. Again, it does not require deep economic knowledge to know that the government’s ability to provide social security to people will be curtailed due to these steps.

Why is the government embarking on such policies obviously detrimental to the interests of the common people? The blunt answer is, because they are in the interest of the corporates, who finance the party in power.

What should the common man then do? The Joint Platform of Central Trade Unions, Independent Federations and Associations and the Samyukta Kisan Morcha are showing the way: throw out of power the perpetrators in governance committing this heinous crime against the national economy and the toiling people at every available opportunity, while simultaneously building determined resistance unitedly throughout the country.

Let us, the working class, take up the cause as “MISSION INDIA” to defend our national assets, the nation as a whole and also the lives and livelihood of the toiling people by developing a determined resistance against this direly anti-national policy regime of the present government in power as the toiling people are bearing the brunt of the destructive policy regime in the form of incessant price rise, continuous loss of jobs and livelihood, sky-rocketing unemployment, aggravating hunger and impoverishment and atrocious attack on the rights of the toiling people along with manifestation of obscene inequality through huge increase in wealth of a handful of rich and super-rich among the corporate/big-business class.

Let us spread among the mass of the common people much broader awareness through intensive campaign against this anti-people, anti-national regime and the crime being committed by them against the national interests and lives and livelihood of the people. Let us expose the real anti-people and anti-national ugly face of the ruling class sought to be camouflaged through their captive-media-backed propaganda.

The Joint Platform of CTUs has decided on the following roadmap for heightening the decisive struggle of resistance against the anti-national destructive projects of the ruling regime at the centre:

3. National Convention of Workers at New Delhi against the anti-national, anti-people policies of the government with focus on this latest exercise of loot and plunder against people-the NMP, on a date by the end of October to decide on the future course of action/agitation preparatory to multiple days of strike/action at the appropriate time.

4. Support sectoral actions including strikes in the sectors directly and immediately affected by NMP.