Flaming Factories of Delhi - Human Sacrifice at the Altar of Profit 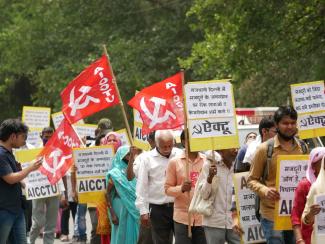 In a horrible incident, a factory fire broke out in Delhi’s Mundka on 13 May 2022. Dozens of workers were burnt alive and several others were injured. The official figure of deaths in the Mundka fire is reported to be 27, and the number of missing persons is reported to be 29. However, a fact finding team constituted by AICCTU that visited the place estimates that the number of deaths to be not less than 100.

The incident took place in a building that was being used for assembling and storing routers, CCTVs and adapters. Cofe Impex Private Limited was using the building as its factory premises. Around 250 workers were working in the factory. This factory has been functioning in complete violation of all applicable labour laws and safety rules. The building being used as a factory was operating in a congested place, with no fire extinguisher and only one entry/exit point. The factory was functioning without a proper registration or license and had not obtained the requisite No Objection Certificate (NOC) from the fire department. Workers were being paid around Rs. 9000 per month, whereas the minimum wages in Delhi range from Rs 18,000 to Rs 21,000 for unskilled and skilled workers. This effectively means that the workers in the Mundka factory were being paid less than half of the legal minimum wages existing in Delhi. The workers were also denied legally mandated PF and ESI facilities.

Not an Accident, but a Ghastly Massacre through Violation

Every year, factory fires kill hundreds of poor migrant workers in the National Capital Territory. In 2018, eight incidents of factory fires and deaths of workers were reported in areas such as Bawana, Narela, Sultanpuri, Nawada, Swaroop Nagar and Karol Bagh.  In 2019, 10 incidents of factory fires and related deaths were reported in Moti Nagar, Kundli, Jhilmil, Narela, Jahanirpuri, Keshavpuram, Peerhagarhi, Anaj Mandi, Sarai Rohil and Mandoli. In the factory fire in Anaj Mandi, 43 workers were reported dead. Just like any other factory fire incident, these deaths are under-reported as there is no way to find out the real number of workers working in these factories and the number of casualities amongst them. The factories do not keep any employment register for these workers. Workers continue to work in a most hazardous of conditions, without even being registered as workers and are, therefore, denied any rights. An AICCTU team visited then, the Anaj Mandi factory fire site too and found out the heinous violation of not only the rights of workers but also basic human rights.

Both the AAP and the BJP are Responsible for the Killings

AICCTU holds both the ruling parties of Delhi and offices run by them responsible for the deaths of poor migrant workers in a series of incidents of factory fire. The labour ministry of Delhi government led by AAP is directly responsible for ensuring implementation of labour laws and safety rules in Delhi. Despite several incidents of factory fire deaths, as mentioned above, the AAP Government has not bothered to ensure inspection of these factories. Regular inspections and actions on various reports of factory fires caould have prevented factory fires and consequently the deaths. It could have ended the widely prevalent culture of flagrant violations of laws. The present labour Minister Manish Sisodia must be held accountable for the latest factory fire.

Along with the Delhi government, the Municipal Corporation of Delhi (MCD) is also responsible for guaranteeing safety measures and fulfillment of the condition of requisite licenses to operate these factories. The MCD is ruled by the BJP for the past several years. Let us also remember that the same party in power at the centre has brought four anti-worker labour codes to further intensify the exploitation of workers by the killer companies. The Mayor of the North Municipal Corporation of Delhi, who was responsible for looking after the enforcement of safety rules of building and factories in the Mundka area is also directly answerable for the incident.

AICCTU Holds Protest against the Killings

AICCTU and other central trade unions of Delhi have been consistently protesting against the killing of workers due to criminal negligence by those in power. Protests were held at the residence of Labour Minister Manish Sisodia and also at the residence of the Chief Minister Mr Kejiriwal.