Tamil Nadu: Withdraw all Cases on Anti-Sterlite Protesters at Tuticorin 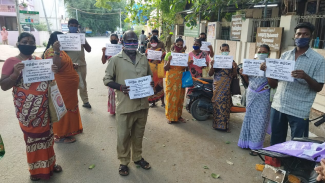 AICCTU cadres observed May day throughout Tamil Nadu by hoisting flags in offices, factories and localities despite the code of conduct was in force in view of counting of votes on 2nd May. The state secretary of CPI ML also wrote a letter to the Chief Electoral Officer of the state to allow May day events without any hindrance. Other left parties also wrote similar letters in this connection.

AICCTU organised protest seeking attention of the newly formed DMK Government during Pandemic. On 5th May, the birth anniversary of Karl Marx, protesters demanded the newly elected DMK government to focus its priorities to handle the raging Covid situation. It was also demanded to form an exclusive ministry to look after the issues of Covid affected people, including availability of beds, oxygen, ICU, medicines, etc., in addition to proper compensation for the dead. Free Vaccination for all, granting a relief of Rs 10,000 for the loss of livelihood of unorganised workers and the poor due to lockdown, 50 lakhs health insurance to all frontline workers without any conditions, Compensation to the families of the people who died in this period, etc., were the demands in the placards carried by the protesters who observed all Covid protocols. Several cases were filed against the demonstrators of CPIML – AICCTU demonstrators in several parts of the state.

AICCTU observed All India Demands Day on 20 May 2021 joining hands with All India Kisan Mahasabha (AIKM) and All India Agricultural and Rural Labour Association (AIARLA) Several hundreds of workers, farmers and agricultural labourers participated in the protest.

Withdraw all Cases on Anti-Sterlite Protesters at Tuticorin

22nd May was the day of anniversary of brutal firing on Anti-Sterlite protestors in Tuticorin, the incident in which 15 protestors became martyrs in the course of struggle for the cause of closing down the Killer Vedanta plant in Tuticorin.

AICCTU – CPIML observed hunger strike in many places including Tuticorin on 22 May 2021 and also as a part of the Global Action Day Against Vedanta demanding arrest and stringent punishment for perpetrators of the crime and to permanently close down Sterlite factory which was also one of the promises of the DMK in the just concluded elections. It was a coincidence that the DMK led state government announced withdrawal of cases other than cases related to the damage of properties and one job to eligible member of each family who died in the firing which was welcome by protesters. At the same time, the DMK government was also criticised for not withdrawing all false cases including property damage related cases. It is said that majority of cases against the protesters were related to property damage which was actually carried out by the police force and the goondas in favour of Vedanta-Sterlite. Moreover, the DMK government was also criticised for not initiating any steps to punish the culprits who were mainly higher officials of the police and the government and who were also responsible for the brutal police firing without any warning and killing of 15 innocent and peaceful protesters. AICCTU demanded withdrawal of all false cases against the protesters, also stringent punishment to officials responsible for the ghastly incident and also permanently closure of the killer Vedanta plant in Tuticorin. Comrade Sahayam, state executive committee member of AICCTU is part of the ‘Struggle Committee Against Sterlite-Vedanta’ that is spearheading the movement for permanent closure of the plant and also against the opening of the plant in the guise of producing Oxygen.

Sanitation workers held a demonstration on 18 May 2021, under the banner of AICCTU, in front of the office of the Commissioner of Corporation of Coimbatore demanding PPEs, minimum wages, pandemic pay and regularisation of services. The immediate demand was non-payment of wages. The administration was forced to pay pending wages on the same day of demonstration.

AICCTU led Loading Unloading daily wage workers engaged in the godowns of Tamil Nadu Civil Supplies Corporation (TNCSC) went on one day flash strike against police harassment while traveling for work during Lockdown. Workers of all godowns in Tirunelveli and adjacent districts abstained form work on 25 May and the functioning of ration shops were badly affected.

Workers demanded the government to declare them as frontline workers as they are involved in essential services, pandemic pay, transport facilities, etc. They demanded regularisation of services as well. As a response to the strike, the TNCSC management issued a circular saying that Loading workers will discharge their functions during Lockdown, that is to be shown to the police instead of issuing individual ID cards for workers. The order was only a temporary relief and workers will continue with their struggle soon in various forms.

As ration shops are  to work, these loading unloading workers also bound to work in the pandemic period. Being daily wagers, they are also not provided with ID cards by the government corporation.